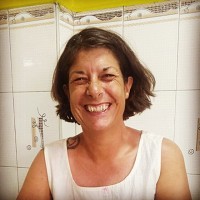 I am an independent teacher, not affiliated to any organisation. My passion is to share the
ancient philosophies and benefits of Yoga and Ayurveda to help others to find peace of mind and well being in a holistic way in the modern world. To enhance this experience I offer retreats, in depth workshops and individual private and therapeutic sessions, lifestyle advice, therapeutic massage and whole food cookery.

As well as traditional Yoga and Ayurveda I offer female inspired and empowering practices and teachings. I share the practices which I myself practice and of which I have personal experience. Practices offered are varied, adapted for the individual and the group and range from traditional Yoga to Well Woman and Yoga therapy styles as well as Yoga Nidra.

In my sharing of everything I offer I aim to be realistic about life and its challenges and therefore may share some of my own life experiences in order to illustrate how Yoga can help you to overcome the difficulties and challenges which we can all face on a daily basis.

I incorporate Yoga and Ayurveda myself as part of my everyday life. I love to practice and fully embrace creativity, fluidity and holistic approaches using the physical as well as philosophical aspects of these ancient arts.

In a 121 session of Massage or Yoga you will receive a comprehensive wellness assessment. From this I can recommend a specific massage therapy, Yoga practice and dietary guidelines as well as lifestyle suggestions. The overall aim is to help you to take control and to manage your health and wellness in Holistic and straightforward manner using the ancient arts of Yoga and Ayurveda.