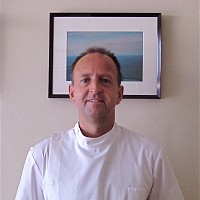 Alan initially studied Sports Science at Brunel and West London and went on to work in the Health and Fitness industry-including managing a health club in Bahrain.This developed an interest in rehabilitation from injury that led to him persuing a career in Osteopathy. He then studied at the British School of Osteopathy in London,where since 1997 he has been a Clinical Tutor.

Alan's main area of interest is in the diagnosis treatment and rehabilitation of sports injuries. Sport has always played a significant role in his life especially that of squash which he played competitively from 1980-1996 mostly in the Bundesliga in Germany.

Alan is registered with both BUPA and AXA PPP.

I specialise in the Treatment,Rehab and prevention of Sports Injuries. I also have a keen interest in the management of pain using Western Acupuncture including Auricular Acupuncture.

I mainly use a Structural approach, but do incorporate a great deal of sports related knowledge into the management of most problems I encounter which usually means exercise prescription to speed up recovery and aid prevention.