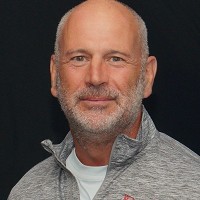 David has recently moved back to Penarth near Cardiff Bay after living in London for the last 30 years & is setting up his new Osteopath clinic at John Bruno Total Training in Glebe Street, Penarth near Cardiff Bay. After spending 20 years as a Medical Photographer working in a number of hospitals around the UK he decided to retrain as an Osteopath at the London School of Osteopathy. On graduating in 2008 with a BSc (Hons) in Osteopathy, he opened his own clinic & gym, Langdon Osteopathy, near London's Canary Wharf which he ran until deciding to move back to Penarth in 2019. He is also qualified as a sports massage therapist, a western acupuncture practitioner, is qualified in the use of Kinesio Taping & is a Poliquin Certified Personal Trainer & Kinetic Link Training instructor. David's main interest outside of osteopathy is sport, especially rugby union. He played rugby at London Welsh from 1992 to 2010 retiring through injury at the grand age of 44. In London David kept in touch with rugby by working with the WRU's Welsh Exiles RFC programme, he was Head of Therapy for Old Priorian RFC for 9 seasons & for 4 seasons was Head of Therapy for London Welsh RFC where he provided osteopathic/rehab services & match day pitch-side 1st aid cover. David is now working with Old Penarthians RFC as their Head of Therapy. He has also worked as an osteopath at McGuigan's gym in Battersea where he looked after former WBA (Super) Featherweight Champion Carl Frampton.

It is his interest in sport and his personal experience of recovering from a number of injuries that brought him to osteopathy and he's keen to build on his experience of treating and rehabilitating sportsmen and women competing at all levels from amateurs to professionals. It is important to remember however that it isn't David's intention to only treat sports people but also to help anyone who may need his services.

David is registered with the General Osteopathic Council (GOsC) in accordance with the Osteopaths Act 1993 and is a member of the British Osteopathic Association (BOA). He is also a registered specialist practitioner with the following major health insurance providers: