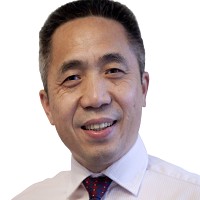 Posted by Tianjun Wang 1672 Days Ago

I report a young male stroke coma case caused by brainstem haemorrhage (BH) that was in unconsciousness after five weeks and could not response to the conventional medicine. The family relatives had searched local acupuncturists but all declined as they had no experiences to treat this kind of serious stroke patients. Final Tianjun Wang (TW) was invited by a local TCM practitioner (Olivia Guo) to start the treatment after received the signed consent from the patient relatives and the hospital.

The 31-year-old male patient was sent to the A&E of the Queens Hospital (QH) Romford, after found with coma in a gym toilet. He was diagnosed with Brainstem Haemorrhage (BH) after a MRI scan. After the emergency rescue and 4 weeks of routine health care, he was survival but still in coma with quadriplegia. The medical staff in the stroke unit had no more positive medical intervention but just wait, told by the relatives.

The first visit was in the A&E ICU of the Queens Hospital Romford. The patient lied on a medical couch with intubation, catheter and several monitor unites in a separate ICU room. He had a slightly verbal response to open his eyes and a little vertical movement of his eye balls only. His four limbs were all in completely paralysis and no any response. The Glasgow Coma Scale (GCS) was 5, indicate he was in severe coma. Myodynamia (MD) of left side was 1 as his left thumb could slight move and right side was 0.

The first treatment session was in the Neurointensive Care Ward of QH, 11 days after first visit and 6 weeks after his loss of consciousness. His physical examination and investigation was similar to the first visit, with intubation. His two eyes could open in different size and slightly vertical eye ball movement. GCS was 5 and MD was 0-1.

The first needle was DU26 (Renzhong) with 40mm X 0.25mm. The needle was inserted in 25mm depth and 30o upward to nasal spine with strong stimulation of lifting, thrusting and rotation around 100 movements per minute. About 10 seconds his eyes opened with full of tears and strong reaction of cough, grasp for breath, white and stick phlegm from the intubate, spasm of right leg and toes, slightly move of right hand and fingers, which were all positive responses. After accurate marked scape acupuncture zones, six 40mm X 0.25mm needles were inserted into left Motor Zone (MZ), Sensory Zone (SZ) and two needles on Balance Zone (BZ) with high speed movements of 120-150 per minute and 30 seconds each scape points. During the needles manipulation his right hand and leg had slightly movement.  Final needled GB20 (Fengchi) and PC5 (Jianshi). In addition electro acupuncture (EA) was used on MZ and SZ. The total treatment lasted 70 minutes.

The following four treatment sessions continued every other days. On the fourth session, the patient could seat on a wheelchair. When needle touched DU26 area, he slightly moved his head and neck trying to evade the needle. During the needling on DU26, he had a little cough and no phlegm out and no need cleaning and sucking. There were some movements of spasm of both legs and toes, slightly move left hand and fingers. Before the fifth session, he could support his neck and some slightly movement himself with some smiles. His GCS was 8 and MD was 1-2.

From the sixth to tenth session, the treatment procedure were all on the seating position. Firstly needle with strong stimulation on DU14, DU15, DU16, GB20, DU20, DU24 and MZ, SZ, BZ, PZ (Pedal Movement and Sensation Zone) alternatively. Then needle DU26 with the similar needle manipulation as above. Finally needle other points including PC5, PC6, HT7, HT8, ST36, SP9, KI1, etc. EA was applied every session on head, arm and legs. At the tenth session, Wes could lift left hand himself and wipe his mouth several times a day. He could hold pictures of the daughters with some force and against to took off. He could also rise left thumb with answer. His GCS was 9 (E4 V1 M4) indicate he moved from severe to moderate coma. MD from 0-1 to 2 on right limbs and 3 on left limbs.

The following sessions were continued the similar procedure as above treatment, slightly move points on limbs. See table 1 for detail. On the eleventh session, when the needle was insert on DU26, his left hand left and hold the needle and took it out himself. A good signal to indicate he could move his fingers exactly and location it.

The entire treatment was completed after the fourteen session as the patient was moved to the rehab centre in Northward Park Hospital at the North West London. The family members were very keen to continue the acupuncture treatment, unfortunately it was stopped as the hospital was very strictly for external practitioner to involved in-ward treatment.

Acupuncture could be involved in the treatment and rehabilitation of stroke, even the severe cases such as coma caused by the brainstem haemorrhage, which is quite popular in many China hospitals. But in the western countries, include the UK, acupuncture does not introduced to the treatment of stroke, particularly for the coma.

Most practitioners practice in their own clinic solely, lock of communications with other experienced colleagues. When required to treat difficult or severe cases, some of us have less supports and advices then perhaps declined for this kind of difficult cases. The results could narrow our knowledge and limited acupuncture indications. One of the solutions is to request mentors’ advices or invite senior practitioners to involve the treatment, which could benefit for patients and enhance our experiences as well.

Dr. Wang brings with his a wealth of knowledge and experience of acupuncture, acupressure and Chinese herbal medicine, together with a sympathetic understanding of the needs and problems of Western patients.
Dr. Wang is highly qualified and experienced in most aspects of Traditional Chinese Acupuncture. He gained a BSc and... [read more]