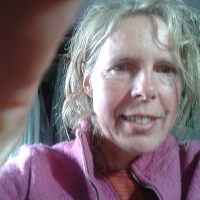 Posted by Dorothea Leber Craniosacral Therapist Over 1 Year Ago

In winter the Earth's life (part of that is expressed in plant and growth, just think about e.g.root vegetables which are sweet and more tasty in winter) draws inside the Earth, and for me, who works as a biodynamic gardener with the growth and as an Earth Energy Healer with the inside, it happens quite naturally that during the months of less growth I do more work on Earth Energy Healing.

My interest in Earth Healing is a very old one. The reason I wanted to do biodynamics, rather than just organics was that biodynamics really works on Earth Healing, restoring vital energy.. I'd been practising biodynamics for quite a while, when I came across Earth Acupuncture, I saw the note in the waiting room of my acupuncturist Richard Creightmore asked what that was, he told me that I really should come to the workshop. It was winter, so I went. And I'm so glad I did. It opened a whole new world, of which I didn't know. It was accessible, and tangible, and could be felt. I caught fire, and did a whole training in Geomancy and environmental healing. And then, seeing that often also the people need healing I trained in Cranio Sacral Therapy.

In my understanding, rather than being a solid lump of rock, the Earth is permeated with energy pathways. Underground energy mostly is accompanied by water (only in a few cases this would be enough for a well and often far too deep). Water distributes minerals, life force, carries memories. If the flow gets stagnant for either natural or man-made reasons or if too much negative memory is stored unreleased in that water, we get what the Chinese call "Sha Chi", or we call it Geopathic Stress. We tend to feel tired, low and eventually, if it's strong enough and we sleep on it for long enough, we might get ill. As a Therapist sometimes I get a sense that my client should be improving but isn't, that's when I watch out for Geopathic stress. Kaete Baecheler, and Austrian maths teacher, and dowser found that some children in her class didn't perform as well as would be right for them, and without fail found that these children were sitting on blocked earth energy pathways.

Sometimes one sees patterns of lower growth in lines across a field. At Michael Hall garden, which I was in charge of for a long time, there used to be a spot where the fruit bushes literally grew away from, until I started working on it.(sometimes there are round patches, which might have been a place where a tree used to be, and used up a lot of fertility and life force over the years so difference in growth isn't always just geopathic stress).

In biodynamic agriculture we have the BD preparations, (similar to homeopathy for the Earth) one of their benefits is restoring balance and life forces back to the earth. For Earth Energy Healing I use Earth-Acupuncture as one of my healing tools. I find acupuncture points, either by dowsing or just by sensing. I temporarily put wooden wands into these places making a deep connection, then I gently hold what's there in my awareness. There is something really important in us connecting on a deep level with what is there. Sometimes I use my voice, but not always. One’s real presence seems to facilitate a healing process and I'm really just the tool. Something happens between earth and heaven which goes completely beyond my power and understanding but it does seem to be vital to make the connection and follow that process of change in one’s awareness, even if one can't quite explain it.

Long ago people put standing stones; often they stand in a special place and help to connect underground and overground, earth and sun or other planets. The steeples of the old churches (before about 1700), are nearly always in such places.

Many trees don't do very well growing on stagnant earth energy. Oaks can deal with it, and seem to move it along by growing lots of outgrowths on the stem. Lightning only ever seems to strike on places of “Geopathic Stress” (i.e. stagnant flow of the earth's energy) there is an old rule in Germany, (von Eichen sollst du weichen aber Buchen sollst du suchen) that in a thunderstorm you should never use an oak for shelter but a Beech tree. A Beech will never grow big on points of Geopathic stress, so standing underneath a big thriving beech one would stand on a safe place. Insects, bacteria, fungi all seem to thrive on it, and it's a good place for your compost. Ants have their “roads” following these lines (and underground streams are of course not straight, but are meandering like a brook) Bees thrive on crossing points of 2 lines. Just recently a colleague had something interesting happening: He had worked on grounds freeing the flow of the earth energy (or clearing Geopathic stress). Then later he was asked to find suitable places for beehives. He still looked for the crossing points of the now free flowing pathways and determined the place there. As he did that, a big bumble bee kept circling that place. He took that as a “Yes this place is good”. Maybe the important thing is the crossing waterways, not so much the stagnancy of them? Cats will also seek out these places. They don't seem to get harmed from it. Sometimes I think it might be all the purring and humming and singing that is freeing and moving things along